Multitasking is a myth, even for a Super Woman 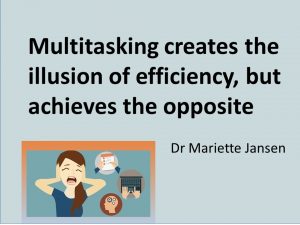 Multitasking is a fantasy

Follow this blog on bloglovin
If you are not a computer, forget the idea of multitasking. The term ‘multitasking’ was made up in the computer industry, referring to powerful multiprocessors, performing simultaneously complex calculations.

Humans are not computers and even if you are mega efficient and highly productive. It has nothing to do with multitasking. The human brain is physically not able to perform more than one task at the time.

MIT neuroscientist Earl Miller research concludes that our brains are ‘not wired to multitask well… When people think they’re multitasking, they’re actually just switching from one task to another very rapidly. And every time they do, there’s a cost.’

The brain can be trained to switch rapidly and when automatic tasks are involved it is really easy to continue the switching. When we complete a task, the brain produces dopamine, the reward hormone. The brain loves dopamine and in order to get more, it will keep switching between small mini-tasks to create instant gratification.

In our perception we accomplish a lot, when we’re actually not achieving a lot. But hey, we feel good and addicted to that feeling!

There is a price to pay for the illusion of multitasking

A study at the University Of London showed that people who multitasked while performing cognitive tasks experienced significant IQ drops. In fact, the IQ drops were similar to situations of skipping a night of sleep or smoking marijuana. How about that?

According to the American Psychological Association, multitasking may seem efficient on the surface but takes more time in the end and involves more error. David Meyer, PhD, a professor of psychology at the University of Michigan, mentions that even brief mental blocks created by shifting between tasks can cost as much as 40 percent of someone’s productive time.”

How would it be to get back 40 percent of your productive time? Consider a 40 hour working week, which is a dream scenario anyway, and gain 16 hours a week, just by eliminating multitasking.

That’s food for thought….. or food for action?

Share your thoughts in the comment box or talk to me about the actions you could take and book a FREE Clarity Session over the phone.